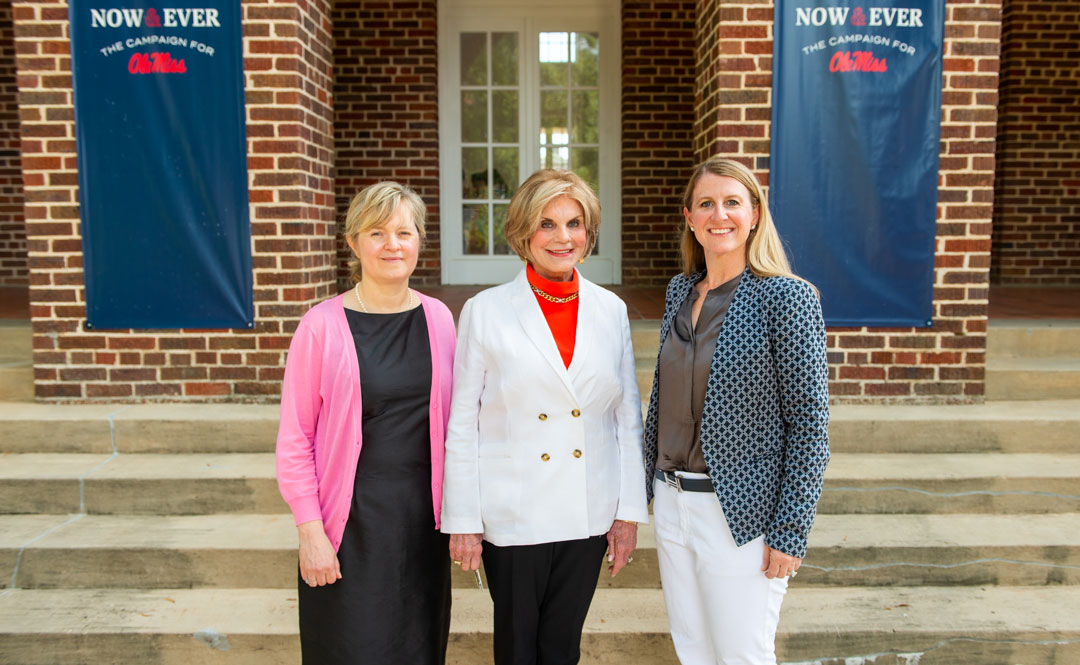 Suzan Thames of Ridgeland, Mississippi, center, is serving as the new chair of the Ole Miss Women’s Council for Philanthropy, and Margaret Khayat of Oxford, Mississippi, left, is a new council member. They are welcomed by Liz Randall of Oxford, right, the outgoing chair of the council. Photo by Bill Dabney/UM Foundation

The Ole Miss Women’s Council for Philanthropy (OMWC), a celebrated scholarship program at the University of Mississippi, welcomes a new chair and a new member to further its mission to nurture student leadership, philanthropy and mentoring.

Suzan Thames of Ridgeland, Mississippi, begins as the new chair, and Margaret Khayat of Oxford, Mississippi, as the latest addition to the 34-member council.

“Suzan is a phenomenal philanthropist and a charismatic leader who is widely respected for her remarkable track record in successfully pioneering and leading some of the largest philanthropic endeavors in Mississippi,” said Liz Randall, also of Oxford, the outgoing chair.

“Her magnetic personality and leadership style allow her to easily connect with students, council members and donors, and the entire Women’s Council family sees her as the perfect fit to navigate our dynamic growth.

“With her sincere love and reverence of service to others, she beautifully embodies the Women’s Council’s mission in her day-to-day life. It is our hope that our scholars will emulate Suzan’s example as they pursue their own philanthropic endeavors,” Randall said.

As the OMWC enters its 23rd year, Thames plans to enhance the program’s enormously positive impact.

“The common thread throughout my tenure will be the continuation of ‘mission critical’ initiatives and growth in our transformative programs,” Thames said. “Specifically, we will pursue the expansion of diversity in all areas of the Women’s Council, proactive and intentional inclusivity, fundraising for the programmatic endowment, the newly launched Robert C. Khayat Lecture Series and a new facility dedicated to Women’s Council scholars and staff to house our thriving organization and strengthen our culture.”

Since being launched in 2000, the OMWC has built an endowment worth nearly $19 million and is recognized as one of the most innovative and elite scholarships in the United States. Currently, 41 scholars are on the $40,000 scholarships ($10,000 per year for four years).

Thus far, 174 students, including the newest cohort of 11 freshmen for the 2022-23 academic year, have been awarded OMWC scholarships. These awards have become among the largest on campus and are given to young men and women who desire a philanthropic lifepath.

For many years, Thames has championed the healthcare services and research at the University of Mississippi Medical Center, particularly when it comes to children’s medical care and the study and treatment of dementia-related diseases.

She served as the inaugural president and board chair of Friends of Children’s Hospital, which supports pediatric services at UMMC. Her efforts led to friends and family endowing the Suzan Brown Thames Chair in Pediatrics with $2 million in contributions.

Thames also chairs the MIND Center (Memory Impairment and Neurodegenerative Dementia) Advisory Board and serves on the Children’s Cancer Clinic Board.

Thames, who earned a bachelor’s degree in speech pathology and audiology at Ole Miss and a master’s degree in communicative disorders from Tulane University, was chosen in 2011 as the Volunteer Fundraiser of the Year by the National Philanthropy Association.

Thames also serves on the boards of directors of the UM School of Applied Sciences and the Department of Communication Sciences and Disorders. She and her husband, Tommy, have three daughters and six grandchildren.

Being named OMWC chair for a two-year term is an enormous honor, she said.

“The council members of the OMWC are some of the brightest, most committed and compassionate women I know,” Thames said. “Their collective philanthropic and leadership experiences, diverse skillsets and shared affinity for our organization culminate into the powerful engine that has produced our tremendous growth in recent years.

“I am delighted to be a part of their dedication to educating future generations and their eagerness to watch a flicker of philanthropy in these remarkable young scholars grow into their own unique legacies of giving.

Thames hopes to leverage OMWC members’ collective philanthropic experiences to grow the council into a bigger, stronger and more impactful organization — one that serves as a model to other UM groups and to campuses nationwide.

“We will move forward with open eyes to opportunities that will further fulfill our mission and extend our positive influence,” Thames said.

Last year, the OMWC launched the Robert C. Khayat Lecture Series to bring speakers to UM’s Oxford campus who inspire students and community members through thought-provoking topics and conversations. The lecture series serves to share aspects of the Global Leadership Circle (GLC) which provide students opportunities in international studies and internship experiences on a local level.

The GLC’s organizers named this new series in honor of Chancellor Emeritus Robert C. Khayat, who, along with his late wife, Margaret, was instrumental in establishing the OMWC. For these and many other reasons, the council is delighted that Robert and Margaret Khayat’s daughter, also named Margaret, has become its newest member.

“Before formally joining our group, Margaret was an invaluable architect and partner with us in formulating the concept and launch of the Robert C. Khayat Lecture Series,” Thames said. “With her longtime familial connection and direct involvement with the Women’s Council, Margaret is absolutely a perfect fit!”

Randall noted that the OMWC gained a “shining star” with Margaret Khayat and the Women’s Council coming “full circle” with this Margaret continuing her mother’s legacy as a council member and working alongside with her father in launching the Khayat lecture series.

“She is a brilliant and skilled attorney who possesses a thoughtful and kind intellect,” Randall said. “Margaret has unofficially been a member for many years through her involvement and loyal support of the council.

“She illustrates the interconnectivity that is so powerful within the Ole Miss family, and she will serve our students in many areas, enriching our scholars’ experiences through her involvement specifically in mentorship and the lecture series.”

For her part, Margaret Khayat, who graduated from Yale University with Bachelor of Arts, Master of Arts and Master of Philosophy degrees and from Vanderbilt University Law School with a Juris Doctor, said she is honored to join the Women’s Council.

Khayat’s varied career has encompassed working for the late U.S. Sen. Thad Cochran; teaching Southern and Renaissance literature to undergraduates; practicing law with a focus on international trade issues, internal investigations and securities compliance; and devoting more than 15 years to public service as a federal law clerk in U.S. District Courts. She has actively mentored others throughout her career.

“The opportunity to participate as a member of the OMWC is a tremendous gift, and I am grateful beyond words,” she said.

“The OMWC embodies the highest ideals of servant leadership, mentorship and philanthropy. Moreover, the OMWC channels these ideals into remarkably effective action, contributing to the flourishing of individuals and communities in myriad ways.

“The OMWC is living proof of the power of philanthropy to transform, and to be able to participate in the vital work of the OMWC is especially meaningful to me as a continuation of my parents’ commitment to and love for the OMWC and Ole Miss,” Khayat said.

To learn more about supporting the Ole Miss Women’s Council, contact Suzanne Helveston, OMWC program director, at shelveston@olemiss.edu or 662-915-2956, or online at https://omwc.olemiss.edu.