A Gift with Weight 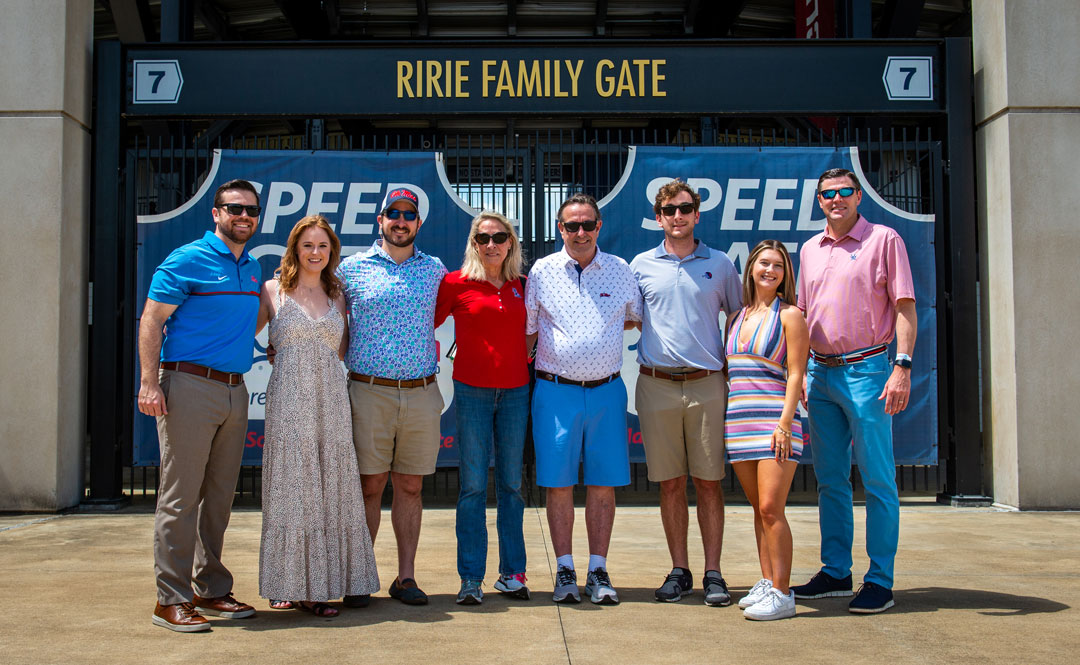 When University of Mississippi student-athletes gain a competitive edge through improved strength, they’ll have the Ririe family to thank.

Scott and Shelley Ririe of St. Louis, Missouri — whose sons are Ole Miss graduates — recently gave $7.5 million to Champions. Now., an ongoing fundraising campaign designed to support the expansion and renovation of the Olivia and Archie Manning Athletics Performance Center.

Among other highlights, the stellar facility will feature a state-of-the-art weight room that will be named for the Ririe family and utilized to strengthen Rebel football players and track & field athletes.

“You have to have first-rate equipment and facilities to attract high-level talent in a very competitive Division 1 atmosphere,” Scott Ririe said. “If you have a first-class weight room, a coach who’s going to have a winning program for as many years as Ole Miss can hold onto him and this beautiful campus, a lot of kids are going to want to go here.

“We like the idea of really being able to make a first-class improvement in the Athletics department because that’s what’s going to sway the kids who are on the fence — in football at least — to want to come to Ole Miss,” he continued. “If you have first-class facilities, you’ll get five-star players.”

With respect to the weight room specifically, “It will be an area where they will enjoy going and working out with equipment that will give every opportunity for anybody who wants to put their mind to it to become the best athlete they can be – the strongest and the fittest,” Shelley Ririe said.

The Riries’ gift is the third largest in Ole Miss Athletics’ history. The family has made similar gifts — $1 million and $3.5 million respectively — to support a reorganization and renovation of athletics facilities at Shelley Ririe’s high school (Dowling Catholic High School in DesMoines, Iowa) and to construct the Ririe Family Wellness Center at Scott Ririe’s alma mater, Cornell University. Shelley Ririe is a graduate of the University of Iowa.

Additionally, the couple made a $250,000 gift to a previous Ole Miss Athletics campaign in 2020 and, in recognition, the Gate 7 entrance of Vaught-Hemingway Stadium was named in their honor. The couple’s gift of $300,000 to the university in 2018 established the Ririe Family Scholarship Endowment, which originally awarded scholarships to two St. Louis freshmen in the School of Business Administration. The Riries made a second gift to the endowment in 2019, increasing the number of available scholarships to four.

“Though Scott and Shelley graduated from other universities, they are as much a part of the Ole Miss family as our most loyal alumni, and for that we are very grateful,” said UM Chancellor Glenn Boyce. “Their support through the years has, and will continue to have, a transformative impact in the lives of our students.”

Vice Chancellor for Intercollegiate Athletics Keith Carter agreed: “We expect Scott and Shelley’s recent gift in support of the Manning Center to play a huge role in building not only physical excellence in our student-athletes but also the self-confidence and drive they will need to succeed in life after college.”

Scott Ririe was introduced to Ole Miss in 2005 when he visited the Oxford campus with his son, Mike – then a junior in high school. The two enjoyed a campus tour, a Rebel football game and festivities in the university’s historic Grove.

“We never visited another school after that day,” said Ririe, founder and co-president of Control Technology and Solutions (CTS), an energy service company based in St. Louis.

Mike Ririe graduated from Ole Miss in 2012 with a bachelor’s degree in business administration and is a commercial real estate agent in Chicago, Illinois. His brother, James Ririe of St. Louis, graduated from the UM School of Business Administration in 2020, earned his master’s degree in business from UM in 2021 and is a financial analyst for Cashman and Wakefield in St. Louis.

Mike Ririe’s wife, Courtney Murphree Ririe, is a 2012 UM graduate and James Ririe is in a committed relationship with 2020 UM graduate Kelsey Baich.

“We keep expanding the Ole Miss family,” Scott Ririe said. “Our family has become attached to Ole Miss through our boys and their love and loyalty to the university.”

The couple has two other grown children: Andy and Elise.

Scott Ririe began his career working in sales for Honeywell International Inc. in Des Moines, Iowa. He became service sales manager in 1984 and moved to St. Louis, where he was soon promoted again to district general manager. In 2000, he and a business partner founded CTS, which has grown to become the CTS Group, operating in nine states with over 124 employees and revenue of more than $100 million a year.

Scott Ririe is a member of the executive committee as treasurer for National Association of Energy Services Companies (NAESCO) board and the Midwest Easter Seals Association board. He also has served on the advisory boards for General Motors and (along with his wife) Ranger Bass Boats.

His high school sweetheart and wife of 39 years, Shelley Ririe began her career with Revlon Inc., marketing cosmetics to retailers. She then joined Ormco, an orthodontic supplier. Today, she owns Branson West Marine and Powersports.

“I can imagine it will be an amazing feeling for the Riries when they see our student-athletes perform at the top of their game, knowing that their gift contributed to such excellence,” said Matt McLaughlin, assistant athletics director for major gifts at the Ole Miss Athletics Foundation. “Their gift will be appreciated by generations of student-athletes, and we are extremely grateful for their support.”

“It’s a great honor that we’re able to make this gift,” Scott Ririe said. “It’s a forever type of gift that our family and extended family can be proud of for generations.” To make a gift to Champions. Now., contact McLaughlin at mlmclaug@olemiss.edu or 662-915-7894. Champions. Now. is part of Now & Ever: The Campaign for Ole Miss.

The Ririe Family Scholarship Endowment, benefiting School of Business Administration students, is open to support. Gifts can be made by sending a check to the University of Mississippi Foundation, with the fund’s name noted on the memo line, to 406 University Ave., Oxford, MS 38655 or by giving online at https://give.olemiss.edu.