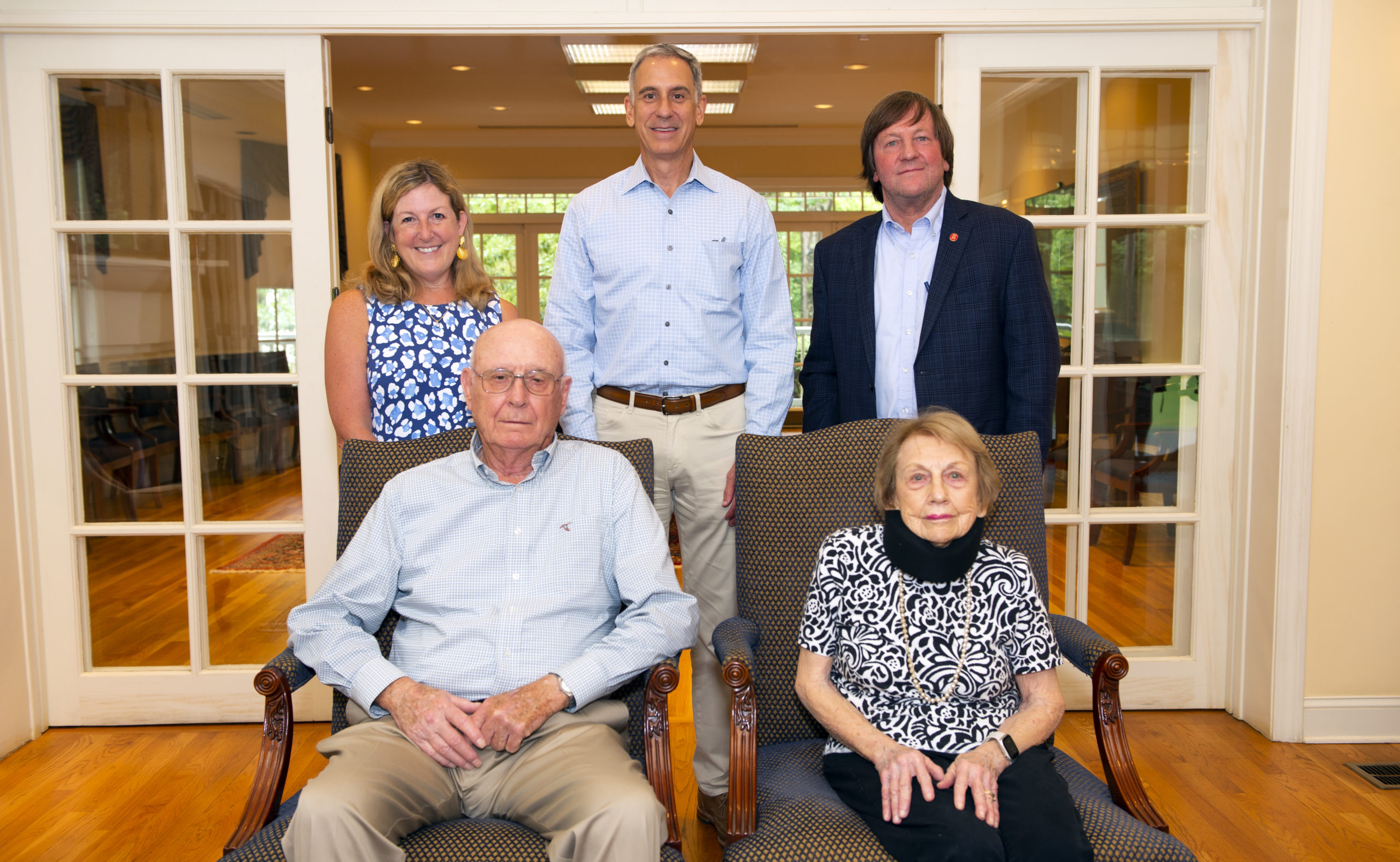 Standing behind Charles and Virgie Dunagin, parents of the late Martin Dunagin, are Susan Duncan, dean of the Ole Miss School of Law; Chris Jones, Dunagin’s friend and fraternity brother; and Mark Wilder, dean of the Patterson School of Accountancy. Photo by Bill Dabney/UM Foundation

A $1 million bequest continues a University of Mississippi graduate’s dedication to helping others succeed.

Dunagin, who earned UM degrees in accountancy and law in 1982 and 1985 respectively, died of cancer on Feb. 2, 2022, at his Oxford home. At the time, he was vice president and chief tax executive for Hess Corp. in Houston.

“We are so appreciative of Martin’s generous support of our efforts in the Patterson School,” said Accountancy Dean Mark Wilder. “Martin had a national reputation for his expertise in tax, and we are proud to have him as an alumnus of our program.”

Of Dunagin’s gift, $175,000 will support scholarships in perpetuity and the remaining $375,000 will help construct the Patterson School’s new building at the corner of Grove Loop and University Avenue.

“The scholarship is designed to target incoming freshmen and it will help us tremendously in recruiting top talent to Ole Miss,” Wilder continued. “This gift will also honor Martin’s legacy through a space in our new building that will be heavily utilized by Patterson School students and faculty.”

Law Dean Susan Duncan shared Wilder’s gratitude, stating that $450,000 of Dunagin’s gift creates an endowment that is broadly used for business law initiatives including oral advocacy competitions, fellowships and leadership training; the remaining $50,000 will be deposited into a restricted account to be used for immediate needs related to business law education.

“We know that Martin was a businessperson and an accountant, so we’re going to dedicate his gift to the Business Law Institute, which we are really proud of. We rank in the top of the nation for that,” the dean said.

“Our Business Law Fellows have the opportunity to work in corporations after their 1L summer. Some of them want to be the Martin Dunagin of their generation — a CEO or an entrepreneur. So, we feel that supporting these Business Law Fellows would be the best way to honor Martin.”

The donor’s friend and Phi Kappa Psi fraternity brother Chris Jones of Dallas, Texas, said Dunagin would be pleased with the ways in which his gift will benefit students.

“Martin was very good at developing, teaching and helping people advance their careers,” said Jones, a 1985 graduate of the UM School of Business Administration and now chief credit officer for Texas Security Bank. “One of the guys Martin tutored and mentored started out as just a junior accountant and is now one of the deputy treasury secretaries in the U.S. Treasury. And there are many more of Martin’s success stories like that.

“I spoke to the people on his team at Hess, and they all just held him in such high regard and told me how much he challenged them and helped develop them,” he continued. “So, I think that his contribution to accounting and law at Ole Miss is an extension of that trait he had of naturally wanting to help others.”

“I can echo that,” said the 1957 UM liberal arts graduate who retired as publisher and editor of the McComb Enterprise after a 50-year newspaper career. “Every chance we got, we would play golf together. A lot of the bag boys at the country club were students at Ole Miss, and Martin would start talking to them. If one of them was majoring in accounting, he would give the kid his name and telephone number and say, ‘If you get over to Houston, call me.’ He would try to help them get an internship somewhere.”

Martin Dunagin started his professional career with the accounting firm Ernst and Young upon entering law school. He worked for the company in Memphis, Tennessee, Dallas and Houston where he became a partner. Specializing in international tax, especially related to the energy business, he worked for Anadarko Petroleum before joining Hess.

In 2001, he earned a master’s degree in tax law from the University of Houston.

“Some people said we hired Martin for his golf game. While he certainly had good golfing skills, Martin was also a terrific tax practitioner. He could understand the most complex tax issues and find solutions for problems. He could rise above the details and see the big picture. We all knew he would succeed in any role he played,” said Dunagin’s former Ernst & Young associate and UM accountancy alumnus Larry Hardy.

“Now we are so pleased that the endowment he created will go to help others get a great education in tax at the Patterson School of Accountancy.”

The donor’s mother, Virgie Sorrells Dunagin, said her son was always driven to succeed. Even as a boy, he wanted to work. At his father’s newspaper, he would do odd jobs in the circulation department and help the news photographers develop pictures. In high school, he worked one summer on the assembly line at a box factory; the next summer, he worked at a bank.

In college, his determination to succeed continued. When his fraternity brothers would skip studying to go to the bars, Dunagin would study first.

“When he lived in the fraternity house, over his desk, he had a sign that said, ‘Study or be poor,’” Jones said, adding that his friend wasn’t all business all the time.

“He was just a really fun guy. He lived and breathed Ole Miss football. During the games, when he was in Houston and I was in Dallas, we would be texting the whole time,” Jones remembered. “He stayed connected to all the people who were in his pledge class, and they had an alumni golf tournament that he would come back to every year.

“Martin was one of the finest guys you could be around.”

Individuals and organizations can contribute to Dunagin’s endowments by mailing a check, with the fund noted in the memo line, to the University of Mississippi Foundation, 406 University Ave., Oxford, MS 38655.