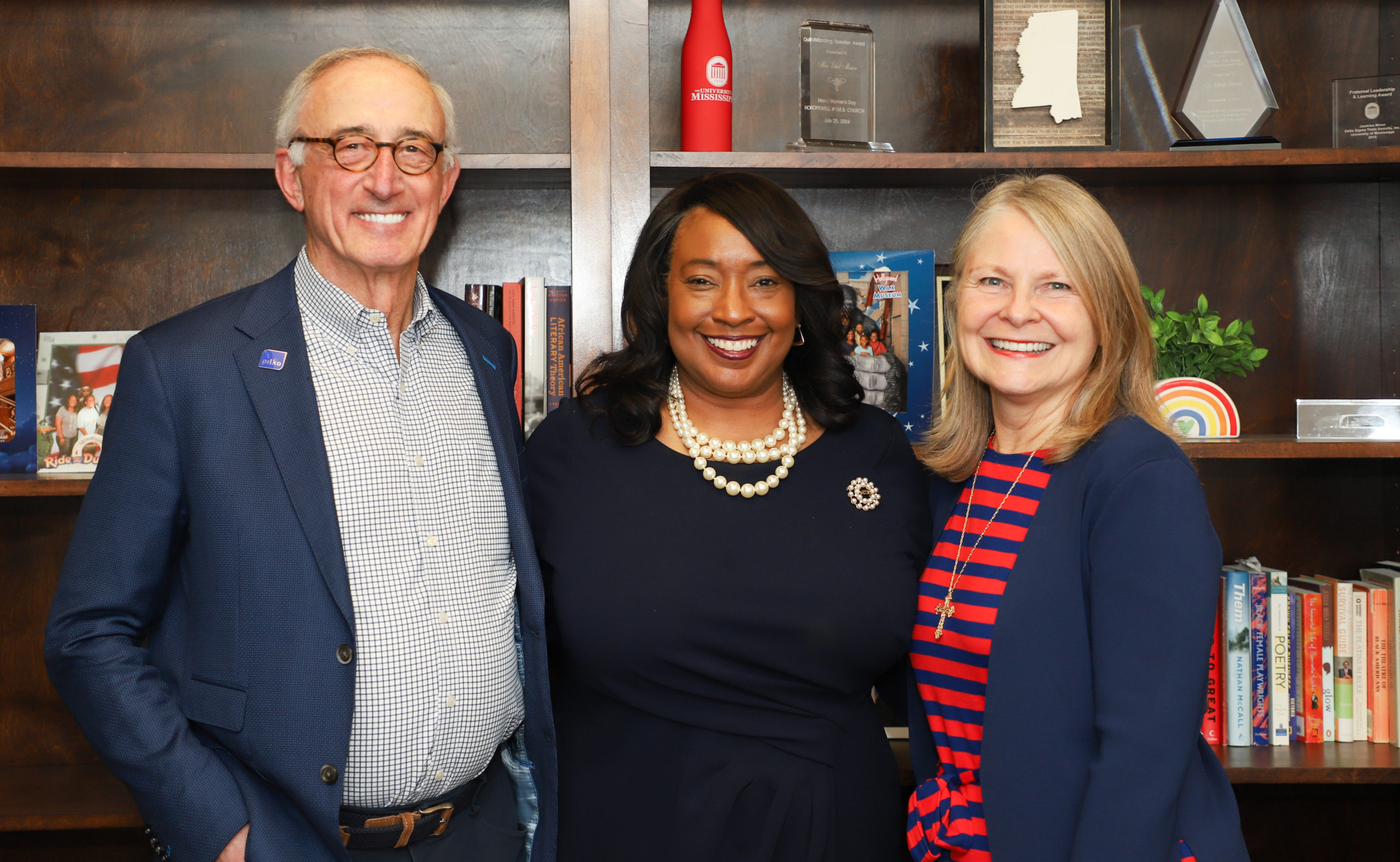 Janet and George Pilko of Houston, Texas, and Park City, Utah, visit with Ethel Scurlock, center, dean of the Sally McDonnell Barksdale Honors College. The Pilkos are co-chairing the Honors College’s steering committee for Now & Ever: The Campaign for Ole Miss, a comprehensive fundraising effort with a goal of securing $1.5 billion in private support. Photo by Kirsten Simpson/UM Development.

Inspired by opportunities she received as a college student, Janet Jones Pilko of Houston, Texas, and Park City, Utah, takes her role seriously as a University of Mississippi alumni leader and donor.

Pilko, with her husband, George, established the Excellence in STEM Scholarship Endowment for Honors College students with a $100,000 gift. They are also co-chairing the Sally McDonnell Barksdale Honors College steering committee for Now & Ever: The Campaign for Ole Miss, the university-wide comprehensive fundraising effort.

“Because I was blessed to receive a Carrier Scholarship, I have always had the goal to be able to pay it forward in some way,” Pilko said. “When offered the opportunity to serve on the Honors College Leadership Council, I jumped at the chance. And then the same thing happened when the campaign was being planned. They asked if George and I would be interested in chairing the campaign steering committee, and I said, ‘Absolutely!’

“These roles move me even closer to my goal of being able to create opportunities for young people who may not be able to go to Ole Miss without receiving financial aid or scholarships. And this goal was the impetus, as well, behind establishing the Excellence in STEM Scholarship Endowment.”

Ethel Scurlock, dean of the Sally McDonnell Barksdale Honors College, said the Pilkos’ gift will help more than student recipients. It is the kind of gift “that will help keep the Honors College in conversations about top honors programs because reviewers consider how much private support a program has.”

“Jan and George Pilko are transformative leaders in the work of Sally McDonnell Barksdale Honors College. I appreciate their willingness to share their time and expert development advice concerning the creation of an endowment to help ensure the future of the SMBHC.  We are fortunate to have such amazing people to lead our Now and Ever Campaign,” she said.

“I was excited with Jan’s initial pledge to establish the Excellence in STEM Scholarship, and I was thrilled when she contacted us to say she was increasing her commitment to $100,000. The Pilkos’ gift will help us recruit and retain some of the brightest students in the nation and play a key role in preparing students to excel in STEM careers,” said Scurlock.

Pilko, who graduated in 1975 with majors in mathematics and English, was a member of the Scholars Program, the precursor to the Honors College.

“We must create some wonderful leaders for this world as we walk into the future,” said Pilko about the responsibility of the Honors College. “I really like the phrase ‘citizen scholars’ used to describe our Honors College students. Certainly while they are undergraduates, students have a goal of learning but there are so many aspects of life to learn about as well.

“I think we’ve created a caring environment where we’re looking out for each other and for those less fortunate while achieving our own dreams. As these young people go through life, they will have that outward focus where they will continue these efforts to help in their communities, wherever that may be.”

The Excellence in STEM Scholarship Endowment is designed for students pursuing degrees in the areas of science, technology, engineering or mathematics. Eligible recipients must be members of the Honors College whose background, achievements and experience demonstrates a commitment to contributing to the advancement of women in STEM, regardless of the recipients’ gender or gender identity.

First preference will be given to Mississippi residents who are entering freshmen, said Pilko, a native of Meridian, Mississippi. The scholarship may be received for up to eight semesters provided the recipients remain in good academic standing with the Honors College.

“Part of what I’ve done in my career is work in areas that relate to energy, and my husband’s firm consults with the energy field,” said Pilko, who has enjoyed a career in the banking and title insurance fields, retiring in January of this year from Old Republic National Title Insurance. “I have had the opportunity to participate in organizations such as Women in Energy and the Women’s Finance Exchange and have seen that so many women have incredible careers in the sciences and engineering.

“Young women often have not been told they can excel in these areas. If we can encourage young women to think about STEM careers, they have the opportunity for long, successful careers and in so doing can bring along other young women or young men with promise.”

The Pilkos previously served as regional co-chairs for the University of Michigan’s $5 billion campaign. George Pilko earned a bachelor’s degree in chemical engineering and an MBA in finance from Michigan.

“George attended the University of Michigan and was also blessed with a substantial scholarship, so we share and support each other in that passion. I helped him when Michigan was having a campaign and now he’s working with me on the Honors College’s comprehensive campaign. We have been excited to be each other’s partner in these efforts.”

“I’m pleased to do it,” George Pilko said of his service to the campaign. “Ole Miss is clearly the leading university in the state and it’s got dynamic leadership at all the levels we’ve seen. We’re impressed with Ethel Scurlock, the new dean of the Honors College. She is a dynamo!”

George Pilko is the founder and chairman of Pilko & Associates, a leading advisor to senior leaders in energy, chemical and related industries, with a vision of transforming operations to be safe, reliable and sustainable. The company, which has worked in 78 countries, helps clients with challenges by identifying and mitigating operational and environmental, health and safety risks.

The Excellence in STEM Scholarship Endowment is open to gifts from individuals and organizations. Send a check to the University of Mississippi Foundation, with the fund’s name written in the memo line, to 406 University Ave., Oxford, MS 38655 or online at https://nowandever.olemiss.edu/ExcellenceinSTEMScholarship.

For more information on supporting the Honors College, contact Brady Bramlett, associate director of development, at bradyb@olemiss.edu or 662-915-3081.