New Career Center Will Be Named in Honor of Support 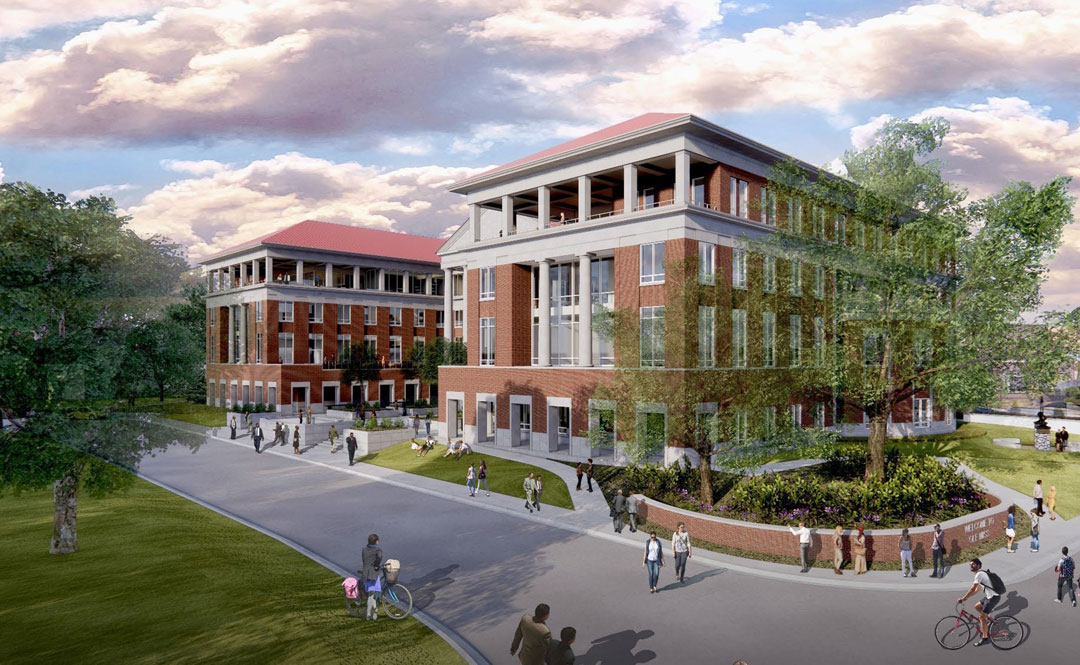 The Gertrude C. Ford Foundation of Jackson, Mississippi, a longtime, generous supporter of the University of Mississippi, has stepped forward with a $200,000 gift commitment for the new Patterson School of Accountancy building.

“The Gertrude C. Ford Foundation is proud to support the nationally acclaimed Patterson School of Accountancy,” said John C. Lewis of Jackson, vice president of the Ford Foundation. “We are grateful to have an opportunity to help continue the strong legacy of this outstanding program.”

The Patterson School is ranked No. 8 in the nation and No. 1 in the Southeastern Conference — marking the 10th consecutive year of top 10 rankings for the school.

The growth in student enrollment is driving plans for the new academic home with a cost of more than $70 million. To honor the gift, the Gertrude C. Ford Career Center will be part of the four-story facility featuring 100,000 square feet of tiered auditoriums and classrooms, study areas, conference rooms, administrative and faculty office suites, and outdoor balconies and terraces to be constructed.

Planned for the heart of campus, overlooking the historic Grove, this new home will provide unprecedented visibility for the Patterson School; serve as an exceptional recruiting tool in attracting and retaining top students, faculty and staff; and bring everyone under one roof with an enhanced sense of community.

Morris Stocks, professor and the Don Jones Chair of Accountancy, requested the support from the Ford Foundation.

“We have had a great relationship with Dr. Stocks over the years, so when he came to us, we wanted to help,” said Stephen Sims of Jackson, president of the Ford Foundation. “We feel that the Patterson School, one of the top schools, is very well known and respected.

“This new building will elevate this school even more. Combined with the new construction of the STEM building and the expansion of the Student Union, Ole Miss is making great strides with this new home for accountancy.”

Stocks said it has been his privilege to work with the Gertrude C. Ford Foundation for many years.

“I consider the board members — Stephen and Cheryle Sims, John and Helen Lewis and Tom and Gayle Papa — as my valued friends. These board members have directed long-term and generous philanthropy to the University of Mississippi, placing the Ford Foundation as one of the most significant benefactors in the university’s history.

“We are so grateful that the Ford Foundation has chosen to pledge its support for the new building that will house the Patterson School of Accountancy at the corner of Grove Loop,” Stocks said. “This new facility comes at a critical time in the growth of the school. We believe that this magnificent, new structure, placed in one of the premier locations on campus, will help move us toward our goal of becoming the top accounting program in the country.”

Sims said the naming of the Career Center for Ford is appropriate.

“We just wanted to find something that would have an impact on students,” he said. “Mrs. Ford was interested in anything that would strengthen education and opportunities for young people. The Career Center is right in line with that because it gives students clear paths for their careers.”

When Sims reflects on his hopes for the long-range impact of the Ford Foundation’s gift, he points to the preparation offered students.

“We hope the Patterson School will turn out well-rounded, knowledgeable graduates with expertise. All accounting is important in our society. We want these students to be well trained,” he said.

That is taking place, according to data from the Patterson School, where students have employment opportunities across the U.S. and abroad because of their top-tier preparation. Graduates of the master’s programs were placed in a record 26 different states in 2021-2022. The formal internship program continues to thrive with 235 participants in 2022.

The Ford Foundation’s support will go toward Now & Ever: The Campaign for Ole Miss, a historic fundraising initiative to secure $1.5 billion in private gifts to strengthen the university for generations to come. The Ford Foundation has provided more than $67.8 million to UM’s Oxford and Medical Center campuses. The Ole Miss Student Union was recently renamed for Gertrude C. Ford to honor that support.

This summer its $2.5 million gift to the Campaign for Children’s of Mississippi pushed the effort over its $100 million goal to $101.5 million. The philanthropic drive helped pay for a multi-story expansion of the state’s only children’s hospital that doubled the square footage devoted to pediatric care at the UM Medical Center.

The Ford Foundation also committed $25 million to the Jim and Thomas Duff Center for Science and Technology Innovation, a science, technology, engineering and mathematics academic building under construction in the Science District.

Ford Way, a major artery running through the Science District between University Avenue and All American Drive, will be named for the Ford Foundation. In addition to being the location for the STEM building, it will be the site of an area honoring Nobel Prize-winning author William Faulkner and the activities he performed in that part of campus. This pathway will bring together science and Faulkner’s literary works in a way that honors their connection to the liberal arts.

The Ford Foundation contributed $25 million for the 88,000-square-foot Gertrude C. Ford Center for the Performing Arts, opened in 2002, and gifts to several other university initiatives, such as the Gertrude C. Ford Ballroom in The Inn at Ole Miss, the Daniel W. Jones, M.D. Chair For Faculty Support on the Oxford campus, the Suzan Thames Chair of Pediatrics at the MIND Center research clinic on the Medical Center campus, and land for Gertrude C. Ford Boulevard, providing a new north-south thoroughfare for the ever-growing Oxford-University community.

There are naming opportunities available in the new building beginning at $25,000 and going up. For more information on supporting the Patterson School of Accountancy Building Fund, contact Jason McCormick, senior director of development, at jason@olemiss.edu or 662-915-1757.