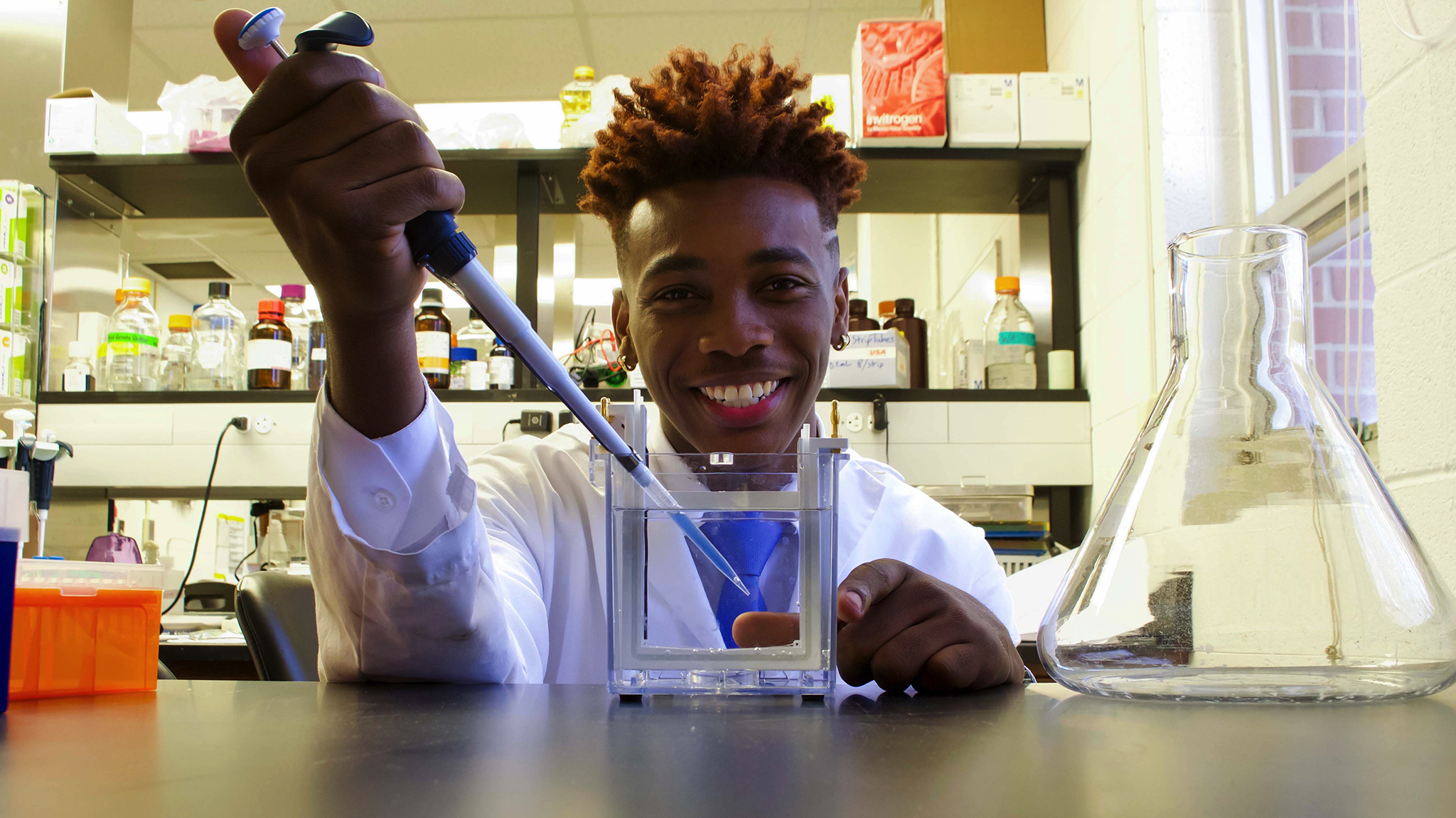 Doctoral student Cellas Hayes has become an accomplished researcher in the Department of BioMolecular Sciences. He plans to continue his work at Stanford University using a Ruth L. Kirschstein National Research Service Award presented by the National Institutes of Health. Submitted photo

Cellas Hayes’ journey in science and research began as a college sophomore.

“I was simply searching for an on-campus job and research experience to strengthen my medical school application,” said Hayes, a graduate student at the University of Mississippi.

It was through this job search that he met Nicole Ashpole, associate professor of pharmacology in the School of Pharmacy. Ashpole was looking for someone to help maintain her laboratory, and even though he wasn’t hired to conduct research, Hayes began to pitch in on experiments.

Through that work, a passion for science and research blossomed.

“After a few months, we noticed that I had what people call ‘the hands’ for science,” Hayes said.

Six years later, the doctoral student in pharmacology in the Department of BioMolecular Sciences has been busy building a legacy. When he began running his own experiments, Hayes became interested in neuroscience, motivated by his grandmother’s battle with Alzheimer’s and his family’s long history with cardiovascular disease.

His research as a student has been successful. Some of his highlights include receiving awards such as the department’s Marvin Davis Pharmacology Award, attaining appointments including a fellowship through the Society of Neuroscience, and presenting his research at the Mississippi Academy of Sciences and on national platforms such as the Annual Biomedical Research Conference for Minority Students and the Society of Neuroscience.

Perhaps his greatest success came earlier this year, when Hayes was chosen for the Ruth L. Kirschstein National Research Service Award by the National Institutes of Health. This award is an F31 fellowship and one of the highest honors a doctoral student can receive. Hayes is just the third Ole Miss student to receive this type of fellowship, and the first since 1987.

“It is a surreal feeling to be the third recipient, and the second was in the 1980s,” Hayes said. “To be the first recipient in almost 40 years, it is absolutely wild and no one could have imagined or expected this, not even myself.”

Ashpole praised Hayes for putting in the hard work needed to be chosen for the fellowship.

“Pre-doctoral research and service awards from the NIH are incredibly competitive and can change the career trajectories for scientific trainees,” Ashpole said. “It has been over 30 years since an NIH fellowship was awarded on this campus, so we are tremendously proud of Cellas and the hard work put into this process.”

Hayes is also the first Black UM student to receive this fellowship, a fact that he takes immense pride in.

“I am the first Black recipient from the institution ever,” Hayes said. “That carries more weight than any other factor because there is not one aspect of my life that has guaranteed me a place in science or academia.”

The fellowship will give Hayes resources to study a medical emergency that affects many people: ischemic stroke. Specifically, Hayes seeks to better understand how our bodies try to protect us and what can be done to help.

“Almost everyone knows what a stroke is and how it can be very debilitating to people’s way of life,” Hayes said. “However, most people do not know that strokes occur in phases, and the later phase actually causes the most damage.”

Hayes explained that in that later phase, key cells in our brains called astrocytes travel to the location of the stroke to repair damage. His research focuses on how these cells use brain-derived hormones and their natural ability to uptake detrimental chemicals released after a stroke to potentially minimize damage.

These studies may lead to new treatments for strokes, he said.

“By understanding how the major cell types of the brain protect or increase stroke damage, we can begin developing new medicines that target the process of protection if that is the case,” Hayes said.

Even after securing such a prestigious fellowship, Hayes did not rest on his laurels. He has already accepted a postdoctoral position at Stanford University in California, which he will start later this fall. At Stanford, he will be transitioning into clinical research, working under Elizabeth Mormino, an assistant professor of neurology.

Hayes will be studying Alzheimer’s disease. By using multimodality approaches such as tau positron emission tomography – known as tau-PET – and fMRI scans of the brain, Hayes will attempt to better understand early changes associated with the disease.

According to his mentor, Hayes’ success should serve as a beacon to those interested in the sciences.

“Cellas is determined to expand his skills and knowledge, while also improving the accessibility of scientific knowledge and opportunities for others,” Ashpole said. “His successes in research at this stage highlight the limitless potential of the scientific field if we are willing to make space for everyone who is eager to step in and be a part of it.”

Hayes echoed that sentiment, saying he hopes to make the scientific community more open and welcoming.

“I hope to normalize that being from a minority group, whether based on race, gender, familiar background or sexuality, does not negate the fact that all people can contribute, and that should be accepted by those holding the opportunities,” Hayes said.

As he takes the next steps of his journey, Hayes is approaching the future with the same mindset that brought him to this point.

“Whatever or wherever my journey takes me, I want to and will be the best,” Hayes said. “Because in the back of my mind, nothing in my life guaranteed me a spot in today’s world, but people like me will be changing that world.”